Like most parents, I think my kids are pretty much the most awesome people in the world.  My husband is cool too, although it’s less cute when he babbles, drools or gets food all over himself. Anyway, I’m truly thankful for my family, home, job, church and friends.

But every now and then, I get overwhelmed. And by every now and then, I mean every day.  And by every day, I mean several times a day. So basically, I’m constantly overwhelmed, which leads me to constantly do things that cause me to think to myself, “that’s just embarrassing.” But since parenting is hard, I’ve decided that what I should really be saying is, “that’s an accomplishment.”

So naturally I thought it was about time to start recording some of these accomplishments for posterity, because future generations may want to know how to be awesomely embarrassing like me. I will probably continue to add to this list, but for now, here is one for every day of the week:

1.) I taught my son to pick his nose. I actually gave him candy as a reward for picking his nose.  In my defense: When I try to clean his nose, he behaves like a wild animal whose last meal is stored up in his nostrils. I’m talking about screaming, crying, kicking, pushing and sometimes growling.  And frankly, someone needed to create some vacancies in that crowded space. I mean you can’t just leave them hanging there, so teaching him to do it himself is an accomplishment.

2.) When he did manage to extract something, he looked at it with mild interest, then proceeded to wipe it on the closest thing within reach, which happened to be the back of his dad’s neck. Now, the next thing that happened is that we both started laughing, and if you are at all familiar with young children, you know that when you laugh at something they do, they continue to do it over and over for a very long time (like up to and including middle school.) So yeah, laughing was a serious mistake. But it was also an ingenious way to make sure he keeps picking his nose, so that’s an accomplishment. Right? Oh. No? Hmm. 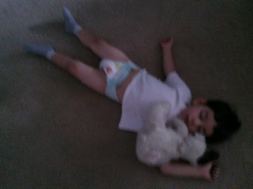 4.) My husband discovered my color-coded excel spreadsheet titled, “Weekly Life Schedule” on our laptop. As though the fact that I am dorky enough to have such a spreadsheet is not enough of an embarrassing accomplishment on its own, he pointed out that it only included two (yes, two) cells labeled “shower.”

5.) I continued to geek-out about my schedule and bought a new (and awesome) type of calendar (watch the video with me and wonder why this has never been patented before). I have high hopes that with the utilization of this calendar, I will streamline my life in such a way that I will manage to schedule more than two showers a week. In fact, I am hoping that the new and improved organized and better smelling me will not even need to include basic hygiene on her calendar at all. That is going to be a BIG accomplishment.

6.) During one of my two weekly showers, I had an 11 month old audience. My daughter stood against the side of the bathtub, fascinated by my pasty white body for at least 15 minutes. When she did crawl away, all I could think about was her consuming the crumpled corpse of a large spider I had killed the night before and left in my trash can on the floor (oops), or whether or not she could reach any of my jewelry, and gleefully throw it behind one of the baseboard heat covers. But neither of those things happened (as far as I know) and she returned in one piece to gaze rapturously at me while I dried off. So I think that’s an accomplishment. But I guess we’ll never really know…

7.) Sometimes when my son is coloring with markers, and there’s no paper within easy reach, I let him use the baby’s face. KIDDING. Who do you people think I am? But yeah, there’s really just no way to look at this one as an accomplishment. That’s just embarrassing.

8 thoughts on “7 Embarrassing Accomplishments of an Overwhelmed Parent”